Within the framework of the Sida-funded project titled ‘Leading the Change: Civil Society, Rights and Environment’, WWF-Cameroon and her partner CSO, the Community Action for Development (CAD), facilitated the development of a gender-sensitive Community-Based Sustainable Tourism (CBST) strategy, the first of its kind in Cameroon, in particular, and the Central African Sub-Region, in general.


Within the framework of the Sida-funded project titled ‘Leading the Change: Civil Society, Rights and Environment’, WWF-Cameroon and her partner CSO, the Community Action for Development (CAD), facilitated the development of a gender-sensitive Community-Based Sustainable Tourism (CBST) strategy, the first of its kind in Cameroon, in particular, and the Central African Sub-Region, in general.

The strategy will enhance Indigenous Peoples and Local Communities’ (IPLCs) participation, ownership, control and maximization of benefits from the management of natural resources. It is within this context that CAD, with the support of WWF, organized a multi-stakeholder workshop on 10 June 2022 at the Bangem Council Hall in the South West Region of Cameroon, to validate the CBST strategy for the Bakossi-Banyang Mbo (BBM) landscape. It was an opportunity to enlist stakeholders’ participation and support in the implementation of the strategy.

The workshop familiarised the over 50 participants, drawn from public and private sector institutions, CSOs, Councils, Donors, and local communities with the CBST feasibility study report, including tourism resources, a synoptic presentation on the Bakossi Green Business Village, discussed and validated the CBST strategy for the BBM landscape at the community level.

The worked brought together over 50 participants including  the Mayor of the Bangem council; the Permanent Secretary of the Ministry of Tourism and Leisure (MINTOUL) at the Prime Minister’s Office in Yaounde;  representatives of the Regional Delegates of MINTOUL and MINFOF, South West Region; the  Divisional Delegates of MINTOUL and MINFOF for Kupe Muanenguba; the Conservators of the Bakossi National Park and the Banyang-Mbo Wildlife Sanctuary;  the Mayors of the Bangem, Tombel, and Nguti Councils; the Flora Travel Tour Operator; Chiefs of Bakossi, Kupe, and Muanenguba  CBST segments; representatives of the Mbororo indigenous peoples community; youth and women representatives within the BBM landscape; data collectors, cluster facilitators; CAD, WWF, the Lead Consultant, and the media.

Opening the workshop, the Deputy Mayor of the Bangem municipality, Enongene Epie, said, “Our landscape is one of the hotspots for biodiversity in the Congo Basin, with a lot of endemic species: birds, plants, fish and amphibians, such as the giant frog. This is coupled with huge cultural, historical and archaeological resources that, collectively, can foster the development of CBST activities in our municipalities.” He said the CBST, If well managed, can be a tool for local development and valorisation of natural and cultural resources of the Bakossi-Banyang Mbo landscape.

Martin Etone, the Coordinator of CAD, in his presentation said the Bakossi-Banyang-Mbo landscape is endowed with numerous tourism potentials, ranging from natural to socio-cultural attractions that create a fertile ground for Community-based sustainable tourism. “We are blessed because WWF and CAD took this initiative, on behalf of the Government, the council, and the communities, to develop this strategy," Mr Etone added.
He said the pilot phase of the implementation will be launched in 2023, to run through to 2027. Mr Etone added, “we all will collectively put hands on deck to raise the necessary funds to implement various aspects of the strategy.” He hopes that by 2027, revenue generated from CBST in the Bakossi Landscape will have increased by 5 percent.

Officially opening the workshop, the Divisional Delegate for Tourism and Leisure for Kupe Muanenguba Division, George Luma Musonge, stated that, “It is difficult not to be part of such a good idea. On behalf of the Government of Cameroon and the Ministry of Tourism, I pledge our support for the implementation of the strategy," Mr Luma Musonge said. The CBST, he added, “allows the local peoples to benefit from their own local resources, protect their natural and cultural resources and market their touristic potentials to the world.”

Overview of the landscape
The Programme Executant for WWF Coastal Forests Programme Cameroon, Theophilus Ngwene, presented an overview of the Bakossi landscape area and revisited the rich touristic potentials it habours, including, but not limited to, large rivers and water falls, the Bermin and Edip lakes, and the Muanenguba twin lakes which is one of the most prominent and unique feature that exists in the country. Mr Ngwene said the “CBST implementation will begin first in the Bangem and Tombel areas and later on to the Banyang-Mbo area, when a proper assessment of the latter’s touristic potentials will have been completed and recorded.”

He said over the years, WWF and CAD have deployed putting resources to promote the conservation of the rich biodiversity potentials of this landscape, in collaboration with the Indigenous Peoples and Local Communities. “But it was realized that the IPLCs were not benefiting much from their exceptional touristic potentials, hence an urgent need to reorganize the tourism sector to fully involve the IPLCs,” he added. "We want the communities to own the process, manage and control it and also have access to these potentials and the benefits that accrue from them,” he said.

For the CBST to succeed, the participants unanimously agreed that the construction of accessible roads to the sites that habour these treasures was paramount. Most of the roads within the landscape are in very poor state, and some almost inaccessible. Giving a facelift to these roads will facilitate Tour Operators who have expressed their readiness to join in the drive to sell the treasures of this landscape to the rest of the world.

The Bakossi Green Business Village
In his presentation, Mr Njamen Barro, the lead consultant who led the feasibility study and development of the CBST Strategy, explained that the Bakossi Green Business Village will serve as the CBST coordination centre for the landscape. "It will be CBST’s pilot centre that will coordinate all the activities across the landscape and serve as the seat of CBST tourism board. Although the Business Village will be located in Bangem, there will be satellite centres in Tombel and Nguti," he clarified.

It was quite promising to have the Permanent Secretary of the National Tourism Board Mr Akame Eitel, present to witness the validation of the CBST strategy. Mr Akame left Bangem quite satisfied with the presentation of the CBST Strategy and all other technical presentations that showcased the rich tourism potentials of this unique landscape. "Rest assured that I will be your voice at the national level,” Mr Akame said. “The document we are validating here today will contribute to the transformation of the lives of the people within this landscape," Mr Akame added. He took a firm commitment to present the CBST validated report to the Prime Minister during a Tourism Board meeting scheduled for July 2022, in Yaounde. It is, therefore, clear that Government’s role is significant for CBST to succeed.

The Secretary General of the Tombel Council, Mr Kundu Johnson and the First Deputy Mayor of Nguti Council, Mr Esua Cyprain, both expressed their readiness to support the implementation of the CBST and to incorporate key aspects into their Council Development Plans.

The day before the validation workshop, a small team that comprised the Permanent Secretary of the Ministry of Tourism and Leisure (MINTOUL) at the Prime Minister’s Office; the Divisional Delegate of MINTOUL, Kupe Muanenguba Division; a representative of the Regional Delegate MINTOUL for South West Region; the communication Officer for the WWF Coastal Forests Programme, and the media braved the very poor and slippery road, under a heavy downpour and on motor bikes, to visit one of the proposed sites, situated at Mbat Village, to host the CBST Green Business Village with a courtesy stop at the Palace of His Royal Highness, the Chief of Mbat Village. The team also made a quick stop at the Mbororo settlement and the Muanenguba twin lakes.

Chiefs pledged their support
Some Chiefs of the Bakossi landscape present at the ceremony pledged their unwavering commitment to the success of the strategy. They promised to take back all key discussions to their subjects and start putting in place strategies to raise funds to support implementation of the strategy. "We want to thank WWF and CAD for this strategy that will help valorize our culture and our resources. From now on, we want to say this strategy has been validated by the Chiefs of this landscape," Chief Akang Samuel of Boka-Bajoh said.

"I owe a lot of appreciation to the organisers—WWF and CAD. This was a dream to us, and we are grateful for its becoming a reality. It will go a long way to boosting the economy of our villages because the tourism that was done here before was not handled in a professional way," remarked HRH Chief Ndode Tobias Ewang of Nzimbeng village.

Also prominent during the workshop were Chief Michael Ngwese of Mbat village, Chief Ejolle Enongene Felix of Muahunzum village, and a host of others, who pledged their firm commitment and promised to provide the necessary support for the construction of the Green Business Village and implementation of other aspects of the strategy.

Mrs Agnes Ngide Ekume from Ekaku village represented the women while Ernest Ekane Akoh from Epen Bajoh represented the youth. They also took a commitment to support the implementation of the CBST strategy.
The Secretary General of the Tombel Council, Mr Kundu Johnson and the First Deputy Mayor of Nguti Council, Mr Esua Cyprain, all expressed their readiness to support the implementation of the CBST and to incorporate key aspects within the council Development plans.

At the close of the validation workshop, the Divisional Delegate of Tourism for Kupe Muanenguba, Mr George Mosoke Musonge Luma, expressed his satisfaction with the outcome of the workshop.  He wished all the participants safe travel and declared the workshop closed after over five hours of intensive presentations, deliberations and exchanges that saw the validation of the CBST strategy for the Bakossi-Banyang-Mbo Landscape. 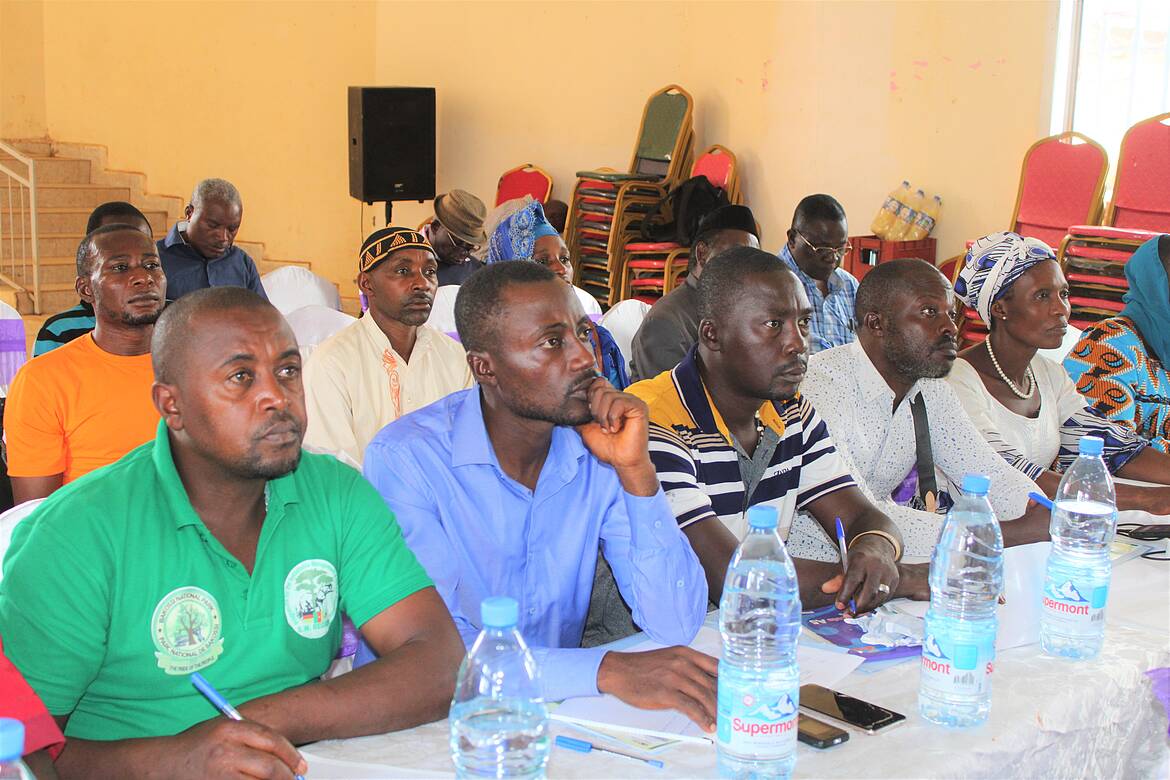 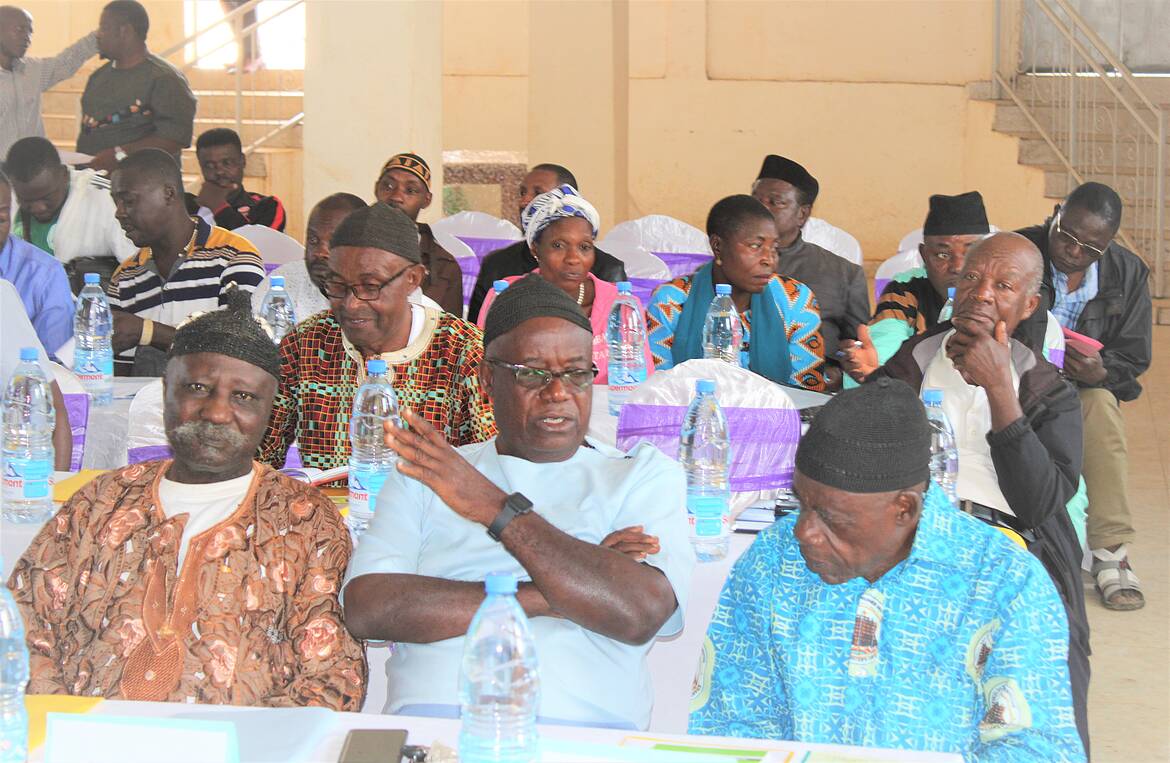 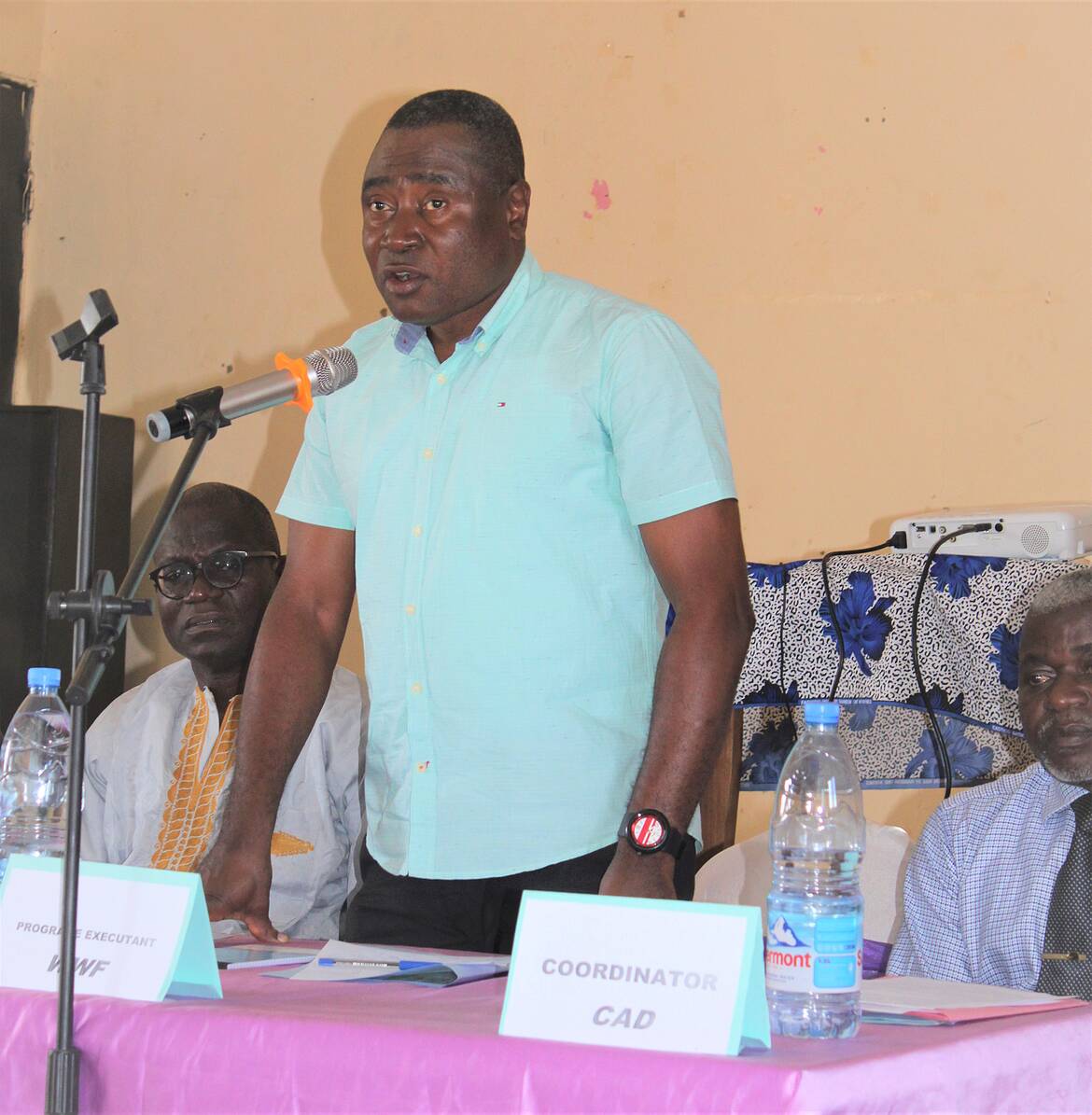 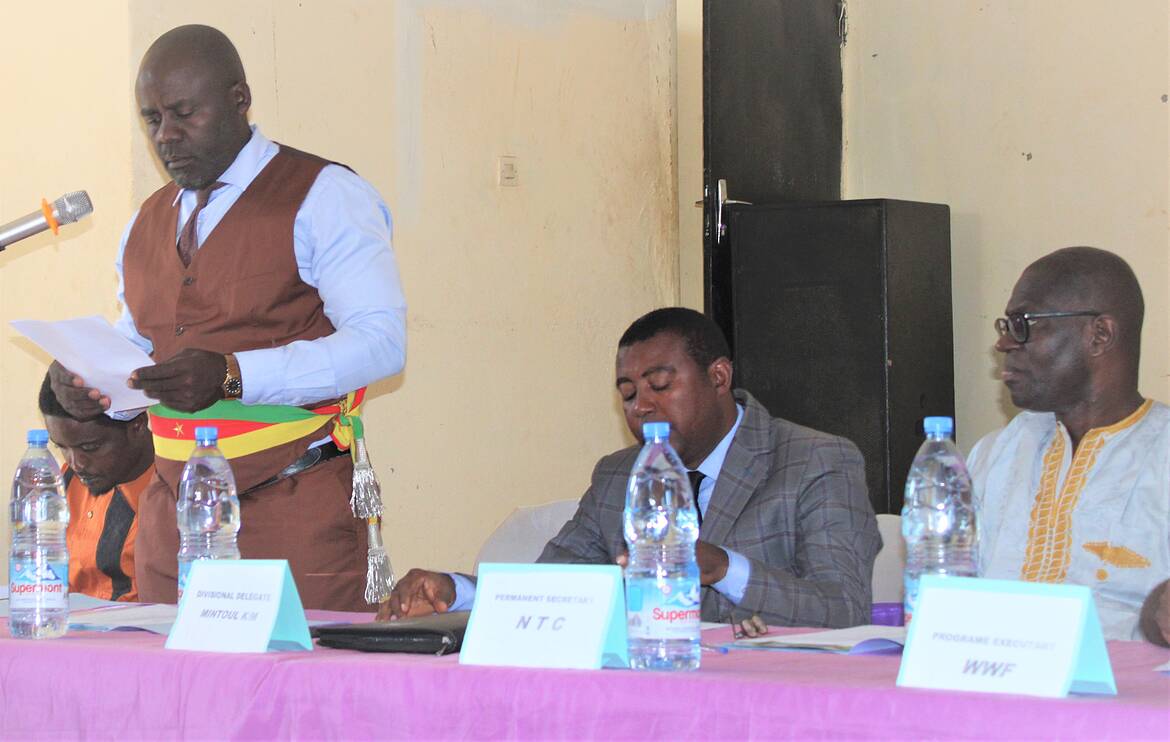 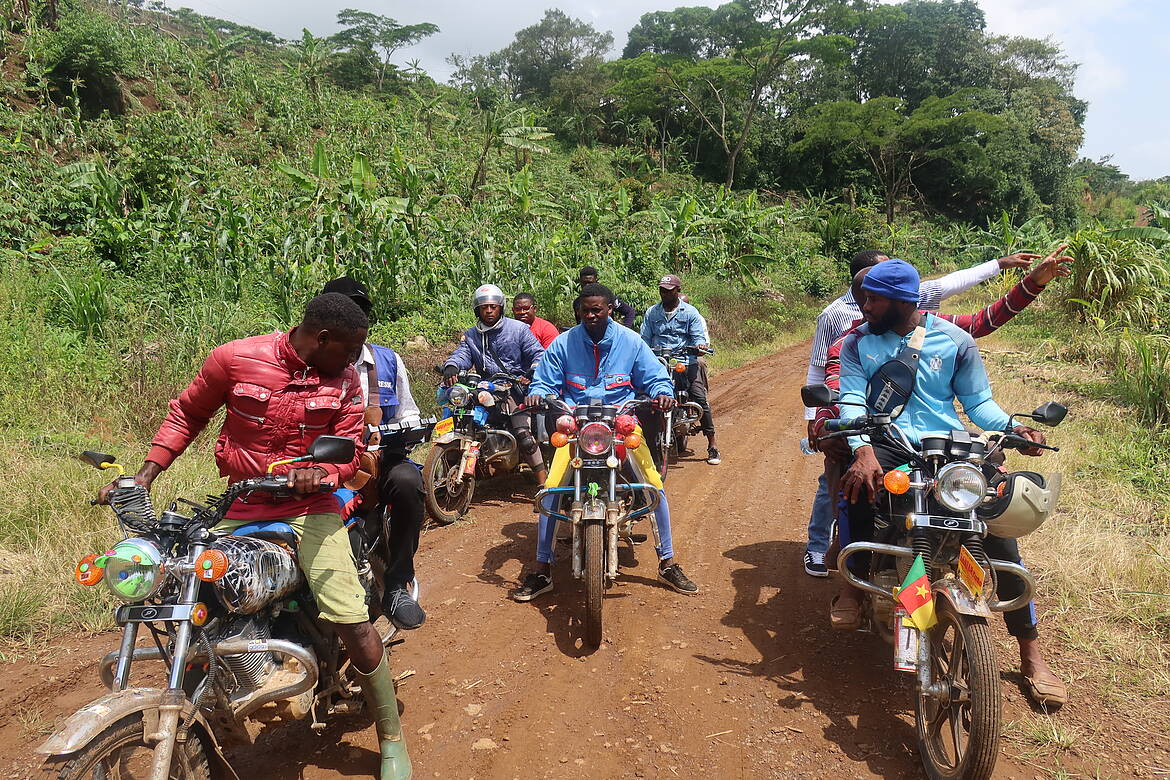 A trip to the Muanenguba twin lakes, Mbat village and the Mbororo settlement 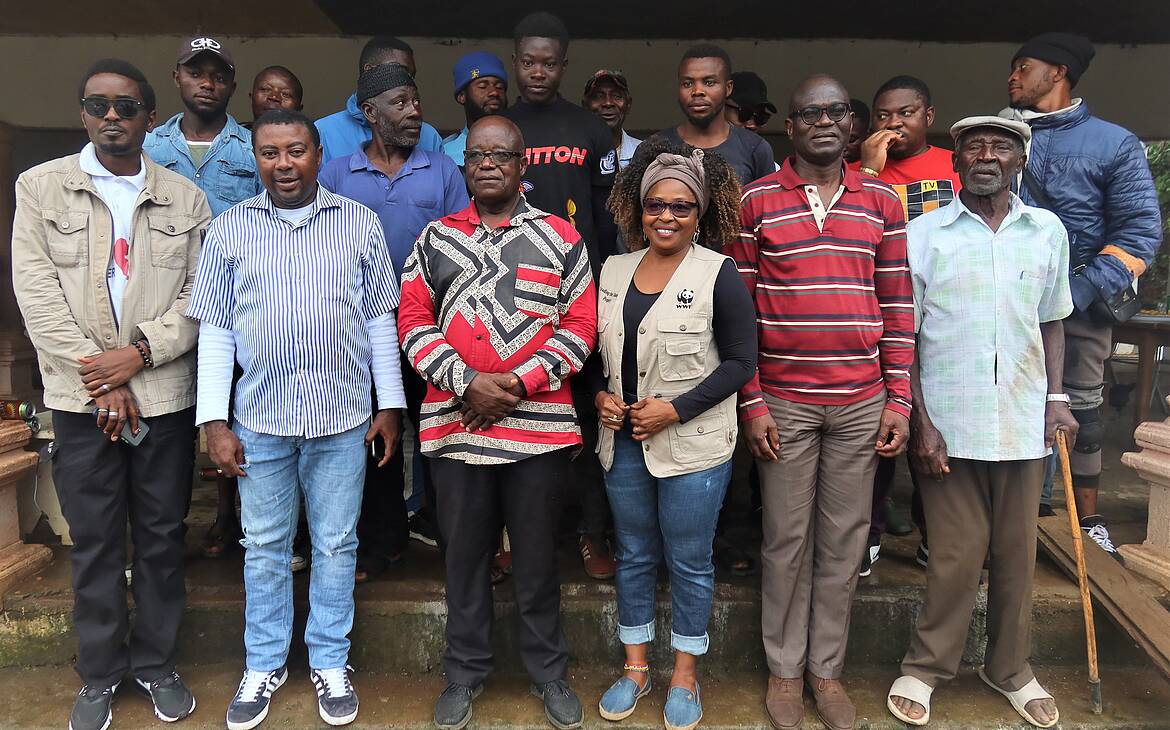 courtesy visit to the Chief palace at Mbat, slopes of Mount Muanenguba

Income-generation, development for youths around Lobeke

Ernest Adjina: The man who led the Baka to sign historic MoU with Cameroon Gov’t